Home » Painting » What You Ought to Know About the Sistine Chapel

Do you know Sistine Chapel welcomes more than 25,000 visitors daily and 5 million visitors every year? Yes, it is true! Thousands of people visit this famous chapel. They explore the amazing collection of the Vatican museums along with the masterpiece of Michelangelo. In other words, I can say that it is a sight to behold for thousands of people.

Sistine Chapel is a famous chapel in the official residence of the pope (the head of the Catholic Church). It is one of the most iconic and historic places in Rome. The chapel is located in Vatican City which is an independent city enclave with Rome, Italy. Its construction was started back in the year 1475. It was the same year when Michelangelo was born! Michelangelo is considered one of the greatest visual artists of all time.

Purpose of the Sistine Chapel

It is a place where all the cardinals from all over the globe come together to elect a new pope. This masterpiece was created 500 years ago. To this day, there is no chapel that can compete with the magic of the Sistine Chapel!

The Sistine Chapel contains many beautiful collections of the Vatican museum. Through these collections, you can discover the culture of the Renaissance. Thousands of people visit this famous chapel without knowing its fantastic facts about the masterpiece. Maybe you know a little bit of information about the chapel but it is important to know about its mythic as well as captivating history. 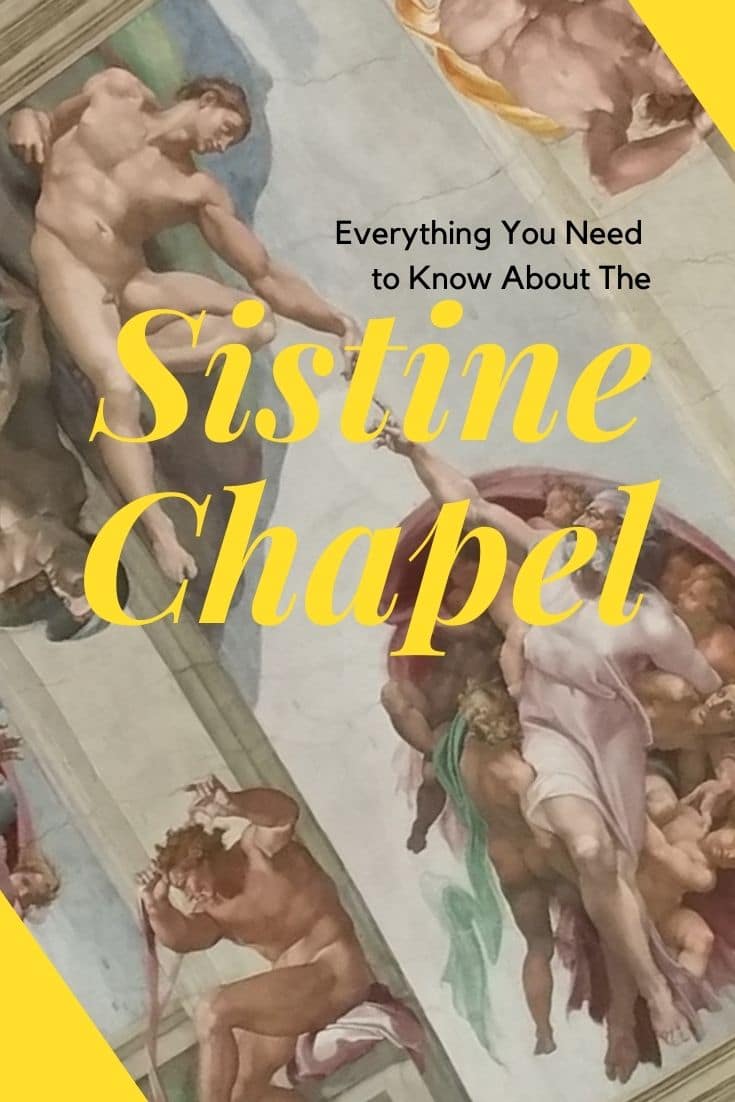 What is the Sistine Chapel?

Sistine Chapel is one of the most valued historical sites of Rome as it is visited by thousands of people every day!

Sistine Chapel is one of the most well-known art places in the world. It stands on the foundation of an ancient chapel, Cappella Magna. That is why this chapel is originally known as Cappella Magna. It is situated inside the Vatican museums. Residing in the Apostolic Palace, it is said to be the private chapel of the pope who is the head of the Catholic Church.

Why the Sistine Chapel is Famous

Sistine Chapel is famous for many reasons. Not only is it a place where a new pope is chosen, but its beauty is further polished by the great frescoes by Michelangelo. This chapel was decorated by the famous Renaissance artists including Perugino, Domenico Ghirlandaio, and Sandro Botticelli, during the era of Sixtus IV.

So, you can say that Michelangelo was not the only artist who worked for the chapel. These renaissance artists also contributed to the ceiling of the Sistine Chapel!

In fact, these painters were commissioned by Sixtus IV. At that time, the ceiling of this more than 500 years old Sistine Chapel was simple. It was painted by Piero Matteo d’Amelia, an Umbrian artist. The ceiling was like a simple blue sky with golden stars all over it. And now, the ceiling of this centuries-old building is said to be the most popular frescoes in the world.

The exterior of the chapel is simple. In fact, its exterior gives a little hint about the spectacular beauty of paintings inside it. Erected in 1473 to 1481, Sistine Chapel is famous for its great paintings. You can find those paintings in almost every corner of the chapel. Due to these master paintings, it is revisited by thousands of historians as well as artists.

BUT this is not the whole story about Sistine Chapel. There is much more than that!

The Construction of Sistine Chapel

Who painted the Sistine Chapel?

Now the question arises here is who painted the Sistine Chapel? As I have mentioned earlier that this chapel was decorated by early Renaissance artists but the main artist to whom people can give credit for painting this beautiful piece of art is Michelangelo.

Michelangelo is a famous artist who was born back in the year 1475 in a middle-class family. When he reached the age of 6, he lost his mother. At an early age, he was not much interested in formal education. Making the sketching of churches as his favorite activity as a child.

When he reached the age of 13, he started studying art by Domenico Ghirlandaio who was the famous artist of that time. By working with the greatest minds of society, Michelangelo learned a lot of skills.

As time passed, his artworks started to shine and the time came when he was chosen to paint the grand Sistine Chapel!

Back in the year 1503, Michelangelo was approached by Pope Julius. At first, Michelangelo was not very happy about receiving the commission. He resisted not to paint as he was not a painter. He used to consider himself as a sculptor at heart and nothing more! Also, he had no experience of working with frescoes. But when the pope insisted, Michelangelo agreed.

At first, Pope gave him the opportunity to work on a great Moses sculpture. Afterward, Michelangelo started to paint the ceiling and spent four years of his life with a brush in hand for painting the ceiling of the chapel. Later on, he was again appointed by the pope for painting the huge fresco known as “The Last Judgment”!

Painting the ceiling of the Sistine Chapel by Michelangelo

Sistine Chapel is considered a historical masterpiece because of many reasons. First of all, it is painted in Fresco. Fresco painting is a famous painting technique in which first a coat of plaster is applied and on this freshly laid plaster, a coat of paint is applied. The result of the painting is not only matte but is durable and depicts a monumental style as well.

Another reason for calling Sistine Chapel as a masterpiece is that it was painted by Michelangelo. Michelangelo has created a completely new style of painting using the technique of fresco painting.

The famous ceiling pieces of art made by Michelangelo are the main attraction in the Sistine Chapel. All his paintings are the symbol of astounding beauty as well as magnificence.

Most people believe that when Michelangelo was painting the ceiling of the chapel, he was lying on his back. But this is not true. The famous artist, Michelangelo, built a wooden scaffold. He and his helpers used to stand upright on it and reach above their head to paint the Sistine Chapel’s ceiling. At first, he called some of his friends for help but later on, he let them go and painted the entire ceiling himself.

When Michelangelo was first approached by Pope Julius II and he started to paint the ceiling in 1508, the whole work was so tiring that he damaged his eyesight during the work of four years. Not only this, but he also suffered from backache at the time of painting the chapel.

Due to the physical strain of the work, he also wrote a poem to his friend in which he told about the pain that he felt during painting. At the end of the poem, he also said that he was not suitable for the job as he was not a painter.

He completed the painstaking task of the chapel’s ceiling in 1512 A.D. In 1535 A.D, he had to return after 22 years for completing the other fresco of the chapel and that was The Last Judgment. Yes, Michelangelo also painted the back wall of the renowned Sistine Chapel.

For painting ‘The Last Judgment’, he was commissioned by another pope of that time. Michelangelo completed this painting in 1541 AD. The beauty of his painting was so captivating that many artists of that time tried to copy his style of art.

The Creation of Adam

Not only this, but there are other fascinating paintings created by Michelangelo, for example, he designed God in a popular fresco of “The Creation of Adam”. Before The Creation of Adam, artists used to represent God with a hand that was shown in a downward direction through the clouds. But Michelangelo completely changed the depiction of God in Sistine Chapel.

God was depicted with an old man having a flourishing white beard and long white hair. In other words, he gave a face to God. This representation was made in the outline of a brain-like shape, giving the correct image of the human brain through this piece of art.

He lived for 88 years and died in Rome.

But most people claimed that due to the restoration of the paintings, the second layer of paint done by Michelangelo was removed. It was not right because Michelangelo intentionally used more layers of paint in some areas to give depth to the figures.

The Sistine Chapel was originally painted by Michelangelo but you cannot ignore the beautiful artworks of other Renaissance artists including Perugino, Ghirlandaio, and Sandro Botticelli. In fact, it is the beauty of the Sistine Chapel that may overwhelm its visitors.

I hope that now you have come to know a lot more about the famous building of the Sistine Chapel and that you are all ready for your trip to Sistine Chapel, right?

Do you know some more facts about the popular Sistine Chapel? If yes, then tell us in the comments section as we would love to hear your thoughts about the famous ceiling and the artists who painted it!