To become better in designing unified compositions and communicating visually, it is important to understand the basic elements of creating space in art. Yes, it is right.

Want to give definition to your composition? Use SPACE in your artwork!

Space in art can be positive or negative. It can be shallow or deep, two-dimensional, or three-dimensional as well as open or closed. It may include the background, foreground as well as the middle ground. Usually, the goal of an artist is to create an illusion of space in drawings and paintings.

What space means when it is applied in art? Does it have some shape? How is space mandatory for the overall success of an art composition? To know answers to all such questions, you must scroll down and read this guide till the end.

Today’s guide tends to highlight everything that you need to know about one of the basic elements of art: Space. You will get to know what exactly space in art means and how positive and negative spaces may leave an impact on artwork.

Moreover, this guide also throws light on every type of space in the art that illustrators and painters should know. We will also be taking a closer look at several ways space is used in art so, let’s take a deep dive into this guide!

Other related topics to help you with your art: 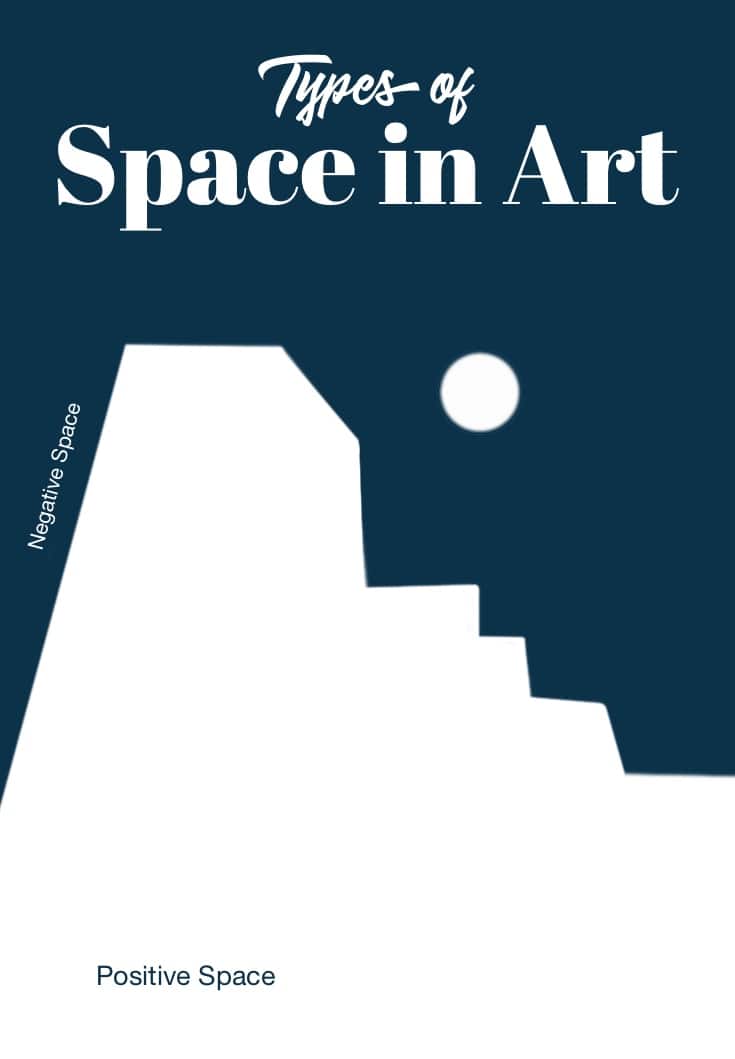 What exactly is Space in Art?

An empty area that surrounds or exists between, around, or within real or implied objects is known as space. It is one of the important elements of art. Space is equally important as color and form in art is.

It can be found in every piece of art created. According to a famous American architect and designer, Frank Lloyd Wright, space is considered to be the breath of art. It means that whether it is painting, photography, architecture, sculpture, drawing, or sketching, space is present in each visual art!

What are the Several Ways of Using Space in an Artwork?

There are various ways by which you can use space in your paintings. For example, positive space, negative space, 2D (two dimensional) space, and 3D (three-dimensional space).

What is Positive Space in Art?

Positive Space refers to the space occupied by an actual object in the art including line, shape, or color. In other words, the subject of an artwork is said to be a positive space. It occupies an important part of the composition and can occur in two-dimensional or three-dimensional art.

Positive space can be anything but that should be the main focus of the painting. For example, if an artist has drawn an apple, then it would be a positive space.

Moreover, a flower, a house, mountains, hills, building, plants, a candle, or an animal in the painting – all can be referred to as the positive space because that is forming an area of interest in the artwork.

If positive space is used skillfully in artwork, your art can add interest in the viewer’s eye.

What is Negative Space in Art?

On the other hand, Negative Space (an opposite of positive space) can be defined as an empty space present between or around the objects, shapes, or forms in an artwork. In other words, it is said to be the unoccupied area that is surrounding the subject matter.

The space in the background that is not noticeable at first is also said to be the negative space. It can flow in every direction between or around the objects.

When the space around the subject forms a particular shape, negative space becomes even more visible. Like positive space, the negative space may also occur in two-dimensional and three-dimensional art. As this type of space has boundaries, so it may also function as a shape in the complete pictorial structure.

The best example of positive and negative space can be illustrated through Rubin’s vase. The space that vase occupies is said to be a positive space. Here, the area in black or the individual letter creates a positive space.

What is the Importance of Positive and Negative Space in Art?

Both positive and negative spaces play a crucial role in creating a perfect piece of art whether it is traditional art or digital art. Basically, both these types of space complement each other. Positive space impacts the reading of the negative space and vice versa.

By getting to know about positive and negative space in art, you can get a better understanding of the meaning of an art piece. The reason is they are extremely important factors to be considered in a good composition.

Open spaces are usually present in two-dimensional or three-dimensional forms of art. They refer to the empty part of the subject.

The landscape paintings by Chinese painters depict open space as negative space. These paintings are usually made with black ink with a large area in white. Consider a popular “Landscape in the Style of Yan Wengui”. The whole painting is made in black color and is showing an atmospheric perspective to show a recession in space.

Other examples of open space include:

How open space is used in 3D art – Example:

Outdoor sculpture by Henry Spencer Moore (a renowned English artist) is the perfect example of open space. This sculpture also relies on the interplay between positive and negative areas. In this artwork, there is a metal sculpture that has holes in the middle. These holes are depicting the negative space in the artwork.

Back in the year 1938, Henry Moore made another abstract sculpture of a woman lying down. This sculpture is known as Recumbent Figure. Open spaces were used in this freeform sculpture by Henry Moore.

Two-dimensional and three-dimensional space are also very important in art. 2D space refers to the space or the distance on the surface. Such a type of space shows length and width but depth or thickness cannot be shown through 2D space.

Positive and negative space, scale, linear perspective, and overlapping shapes – all these principles can manipulate special illusion in two-dimensional art.  There are a variety of artworks in history that show space using the concept of overlapping.

These include the Library by Jacob Lawrence, Man on a Bench by Horace Pippin, and South Beach Bathers by John Sloan.

On the other hand, 3D space creates visual or real depth because it shows length, width as well as height.

What is the relationship between Space and Perspective in Art?

A drawing method that uses lines to create the illusion of space is known as a linear perspective. Linear perspective is a way of creating space in art. Most scenes in paintings are made three-dimensional by using space, no matter whether it is positive space or negative space.

Most artists use size to depict the relationship between space and perspective in the drawings. For example, consider a drawing in which a tree is bigger because it is in the foreground. To show that the mountains or plants are at a distance from the tree, they are made smaller than the tree.

Hence, in such a type of drawing, size is used not only to create perspective but also to show space in the artwork. Moreover, in such drawings, the scale also enables artists to manipulate the proportions.

An American painter, Thomas Hart Benton, was known for showing ordinary people doing common things. In his paintings, he used to draw landscapes, busy cities as well as people working in factories. One of his famous paintings is Spring Tryout.

Spring Tryout creates a relationship between space and perspective. In this painting, Thomas Benton has created negative space in the sky to add perspective in the painting.

Other examples of artworks that show space using linear perspective include:

Other Ways for Showing Space in Art

Remember, the space in art cannot only be created through a linear perspective but there are other ways as well by which an illusion of space can be created on a 2D surface. These include:

Space in art is one of the basic elements that is often overlooked as the principle of good design. Most artists ignore space in their drawings which makes the objects look flat. The fact is creating space in an artwork is quite easy.

There are several ways by which an artist can create space in the artwork. If I talk about positive space, it refers to the space of the defined shape or figure. On the other hand, negative space exists between or around the objects.

Both positive and negative spaces can add interest in an artwork whether it is painting, drawing, sketching or any other piece of art. If I talk about negative space, it plays an important role in drawing the attention of the audience to your piece of art.

Most artists create negative space in their artworks to leave a rewarding experience for the viewer when they see the artists’ work. Moreover, a hidden message or image can also be discovered through negative space.

So, what are you waiting for now? If you want to draw the attention of the viewer towards your piece of art, you must create space in your artwork!

This was extremely helpful, and the art pieces helped to reinforce your teaching. Thank you!

Glad it helped. You're welcome!