Some of my fondest memories were watching Saturday morning cartoons and cartoons every other day for that matter. It’s fun to show your love for those characters and drawing them is one way to do it. In fact, there are a lot of easy cartoon characters to draw!

There are thousands of cartoon characters that you can practice on before proceeding on to making your characters.

They help you learn the different techniques you need to know in order to start your own line.

Let’s get started on drawing your favorite toons and step-by-step instructions on how to draw cartoon characters.

Bugs Bunny is a character famous among everyone and an easy cartoon character to draw for all ages.

Not only just you, but your grandma is well aware of who bugs bunny is as well.

The kids these days are fascinated by the man like a bunny as well.

When you are beginning to learn to draw cartoon characters, Bugs Bunny is a good start.

You can learn it by just looking at a picture or by following a tutorial.

He is going to be a good addition to your portfolio.

SpongeBob SquarePants, a character that lived underwater and brought a smile to everyone, is a beloved TV character and a season.

He is just a square sponge with some holes in him.

His dress is very easy to draw as well as it doesn’t matter where it starts and where it ends.

After all, he is just a square.

You can add colors to him or just draw a sketch.

Since there aren’t many poses, you can try changing his facial expressions instead to get creative with him. 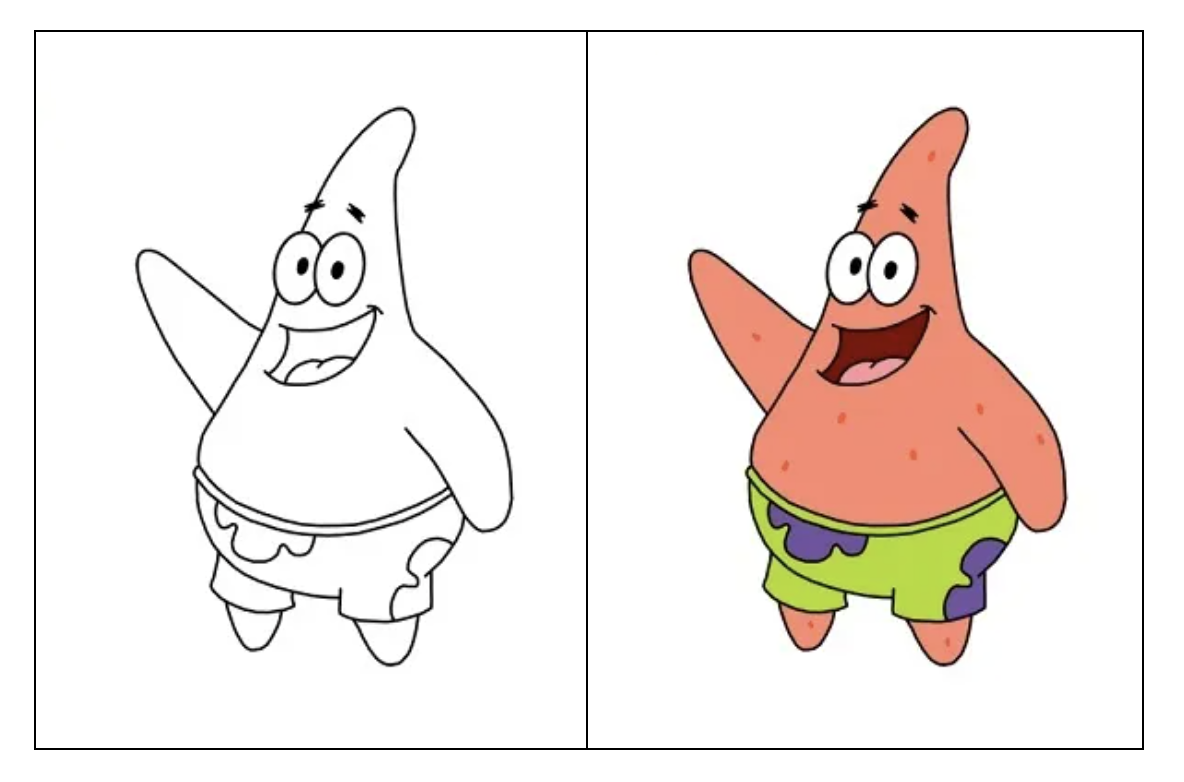 Patrick Star is the best friend of SpongeBob SquarePants.

He is shaped like a star as the animators were trying to achieve a starfish.

His facial features are easy to draw as well, and since he only wears the same boxers, his clothes are not going to be a problem either.

You can draw Patrick Star and Spongebob together in different frames and create different images.

A tutorial isn’t mostly required to draw Patrick Star, but you will find plenty of them online if you need one. 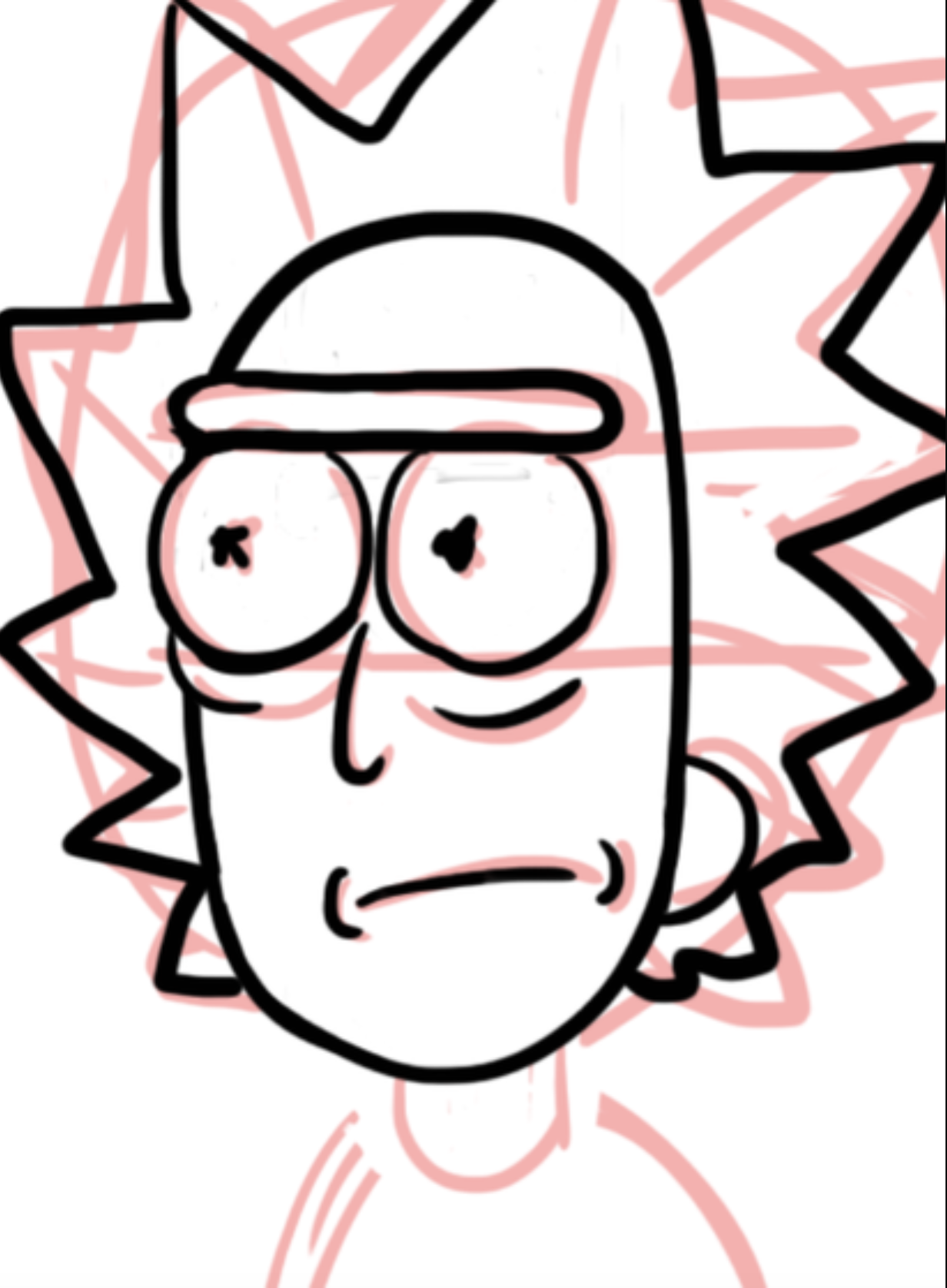 Rick Sanchez is not as historic as Spongebob and Bugs Bunny, but he is getting very famous among the youngsters.

He is a crazy goofy scientist who goes on adventures with his grandson, Morty Smith, and keeps finding himself in new situations.

His face doesn’t have a lot of typicalities, but he is very expressive through his face.

With sparky hair and the uni-brow, his face is very distinguishable.

His clothes are easy to draw, as well. He wears the same lab coat over his blue shirt and has his hair kept the same way as well.

You can also change the hairstyle a bit and call him a Rick Sanchez from some other reality to get creative. 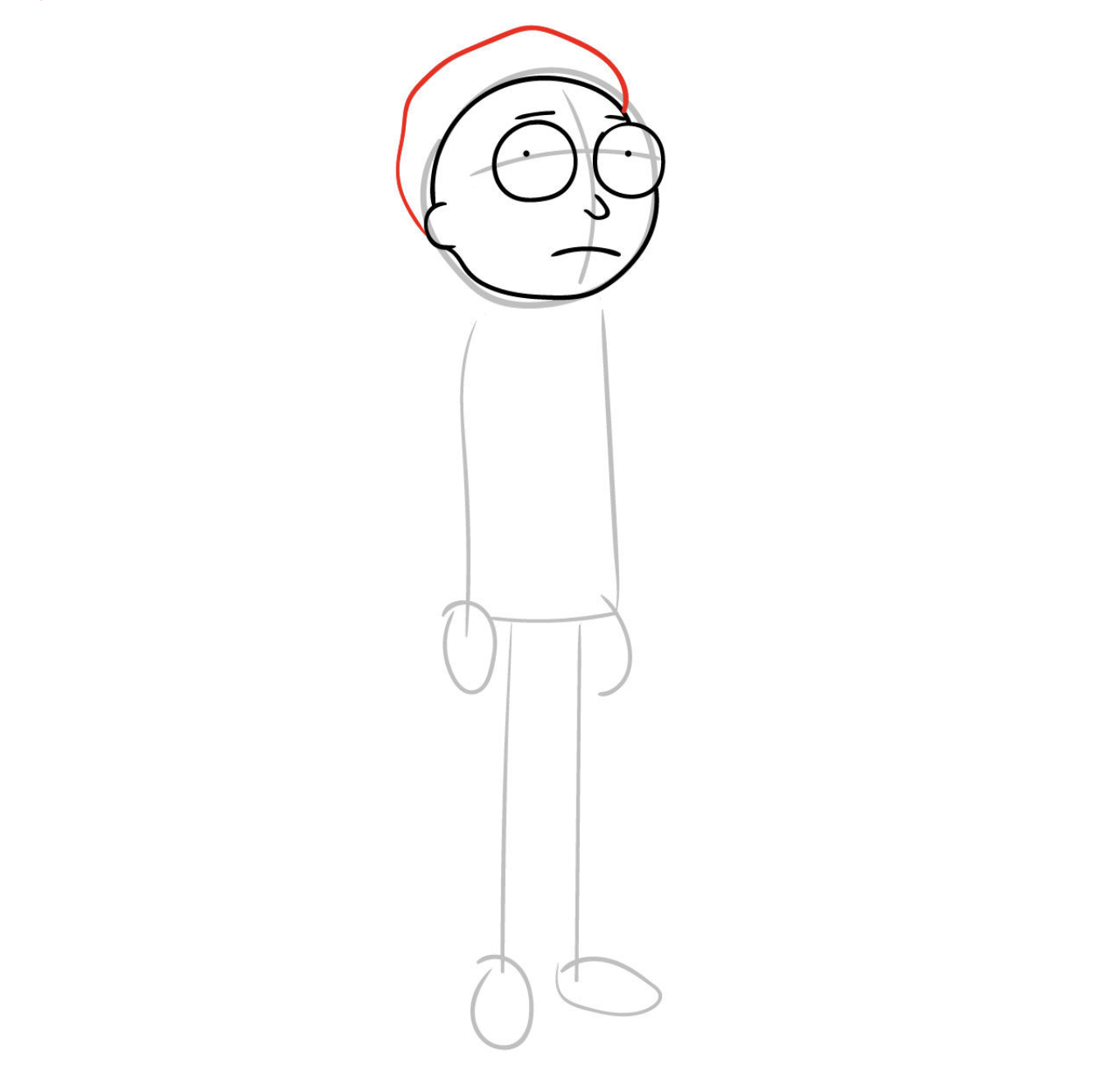 Morty Smith has a less expressive face and can be drawn better.

His hairline is easier as well, and instead of having any lab coat or anything, he only goes around in a yellow shirt with blue pants.

His body structure isn’t complicated as well, and you can draw both Rick Sanchez and Morty Smith together in a frame.

They have many goofy moments, so you can pick any of them to draw them in that situation. 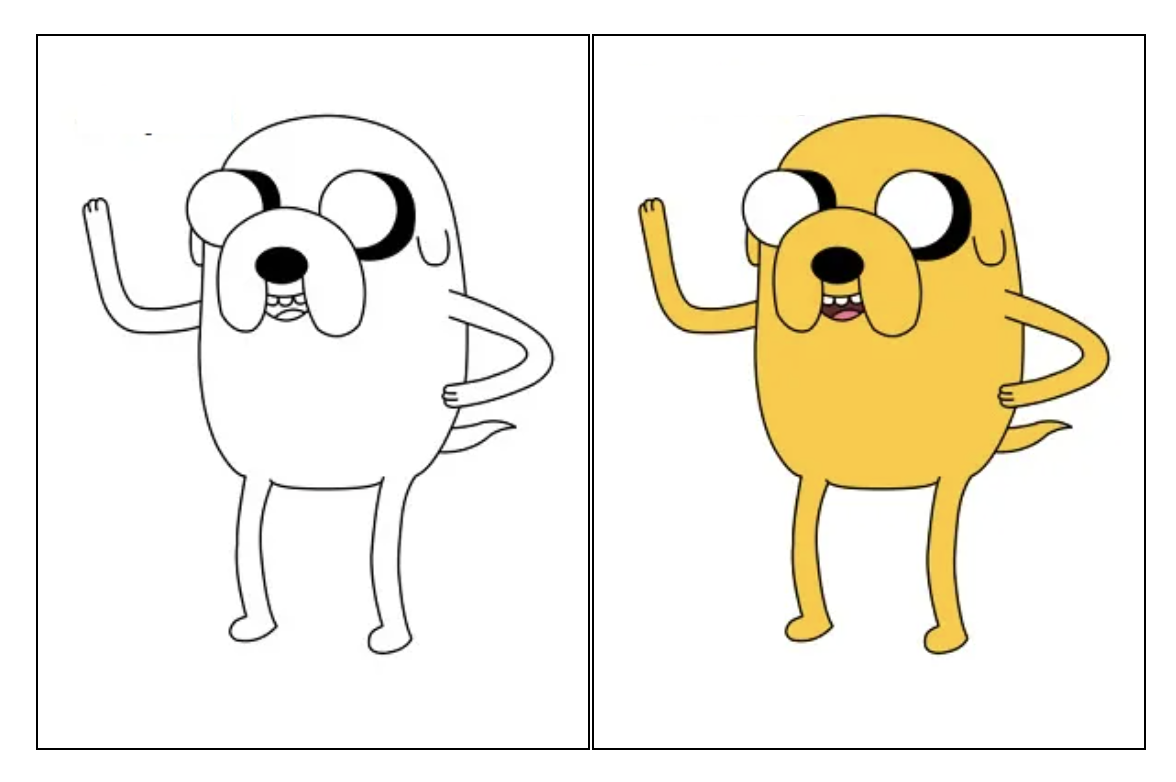 Jake, the dog, is a famous character from adventure times.

His body is just an oval with strings attached to it as his limbs.

Thanks to his stretchable body, you draw him in other shapes as well, and as long as the face is captured right, the picture will make complete sense to all the viewers. 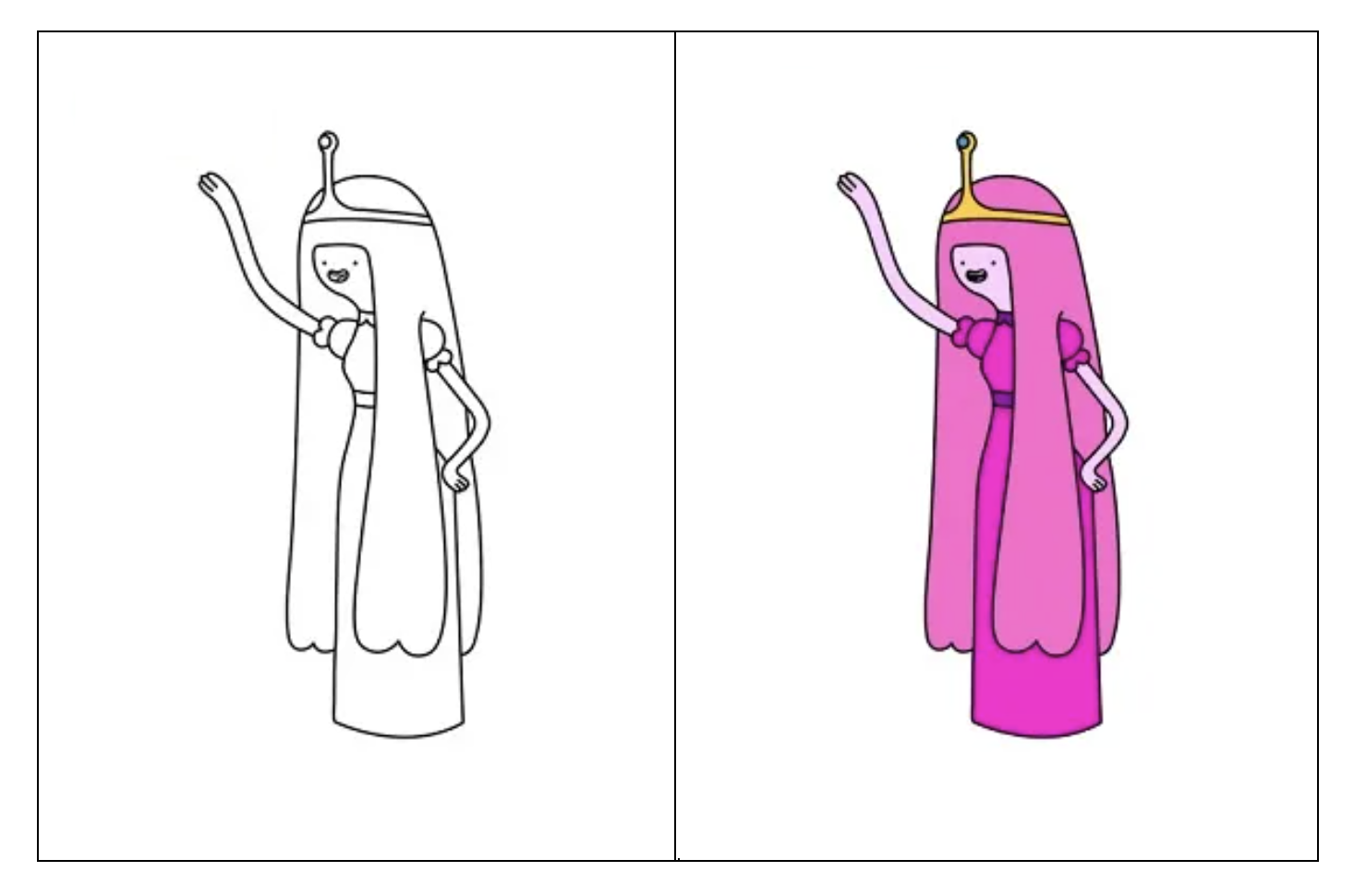 She has the easiest face to draw along with a very simple body.

As she changes her dresses quite frequently in the different episodes of the show, you can practice on her in different poses or different dresses as well.

Just draw a face design, two dots for eyes, and a line for lips.

It does not get any easier than this.

Scooby-Doo is one of the famous cartoon characters of all time.

You can practice drawing a Scooby-Doo in different poses.

Whether it is sitting down, standing, or looking straight forward, you can easily draw this character.

The structure of the character is simple. You just need to draw some circles arranged in different frameworks and here you go.

While drawing a Scooby-Doo, you will find many similarities between a Scooby-Doo and a real-world dog.

So, start drawing a Scooby-Doo and have fun with it! 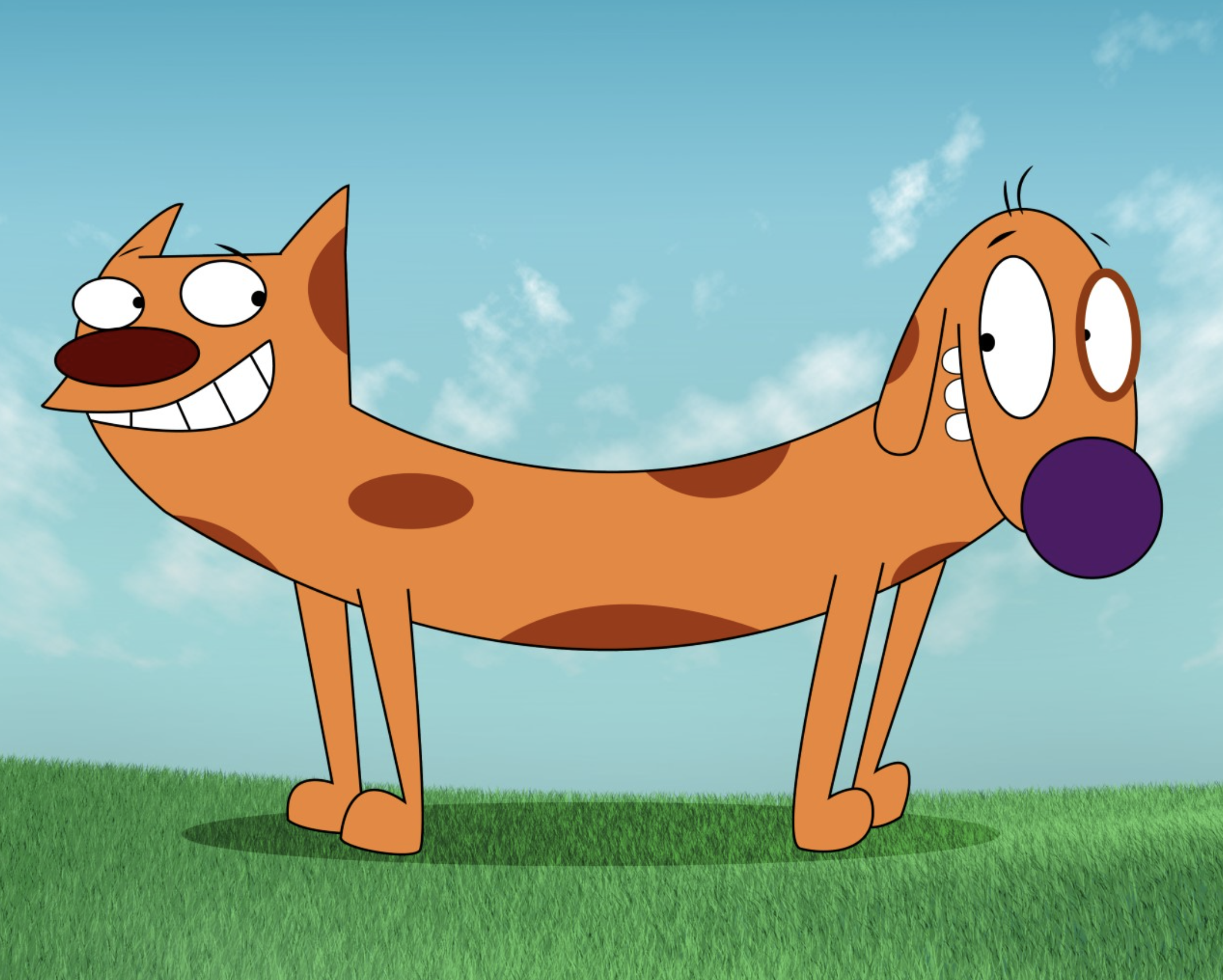 Catdog is a very different cartoon, just a long body with 2 faces at each end of the body.

Their faces are easy to draw, and since they wear no clothes, that’s not going to be a problem.

You can watch a tutorial on how to draw a Catdog properly instead of doing it all on your own.

You can make the body shape straight, curved, or even round, and as long as there are two heads at the end of it, your drawing is going accurately. 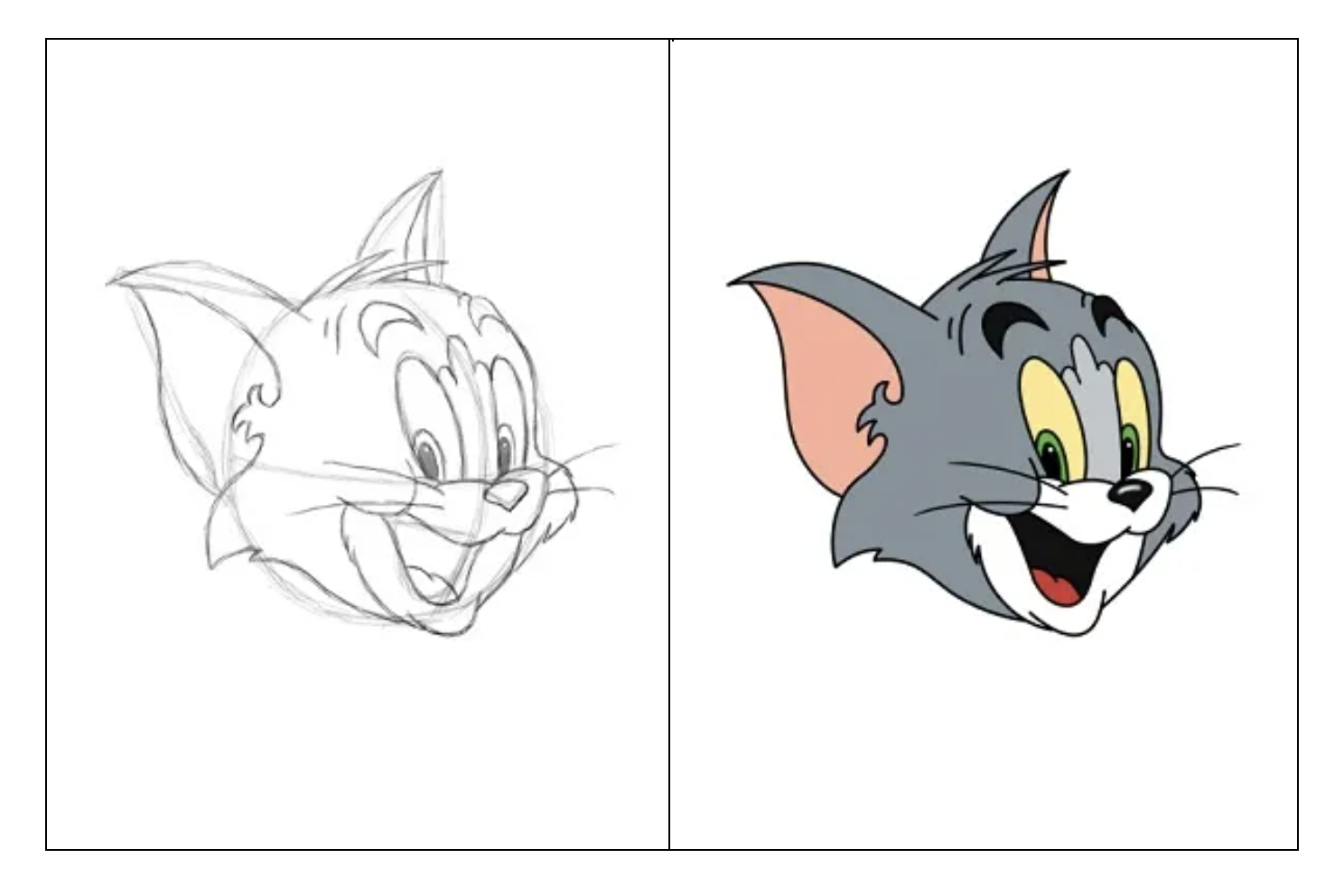 When talking about cartoon characters, Tom and Jerry are two legends that can never be left out.

As they have always aired on the TV together, it is only fair to them to mention them in the same section.

Beginners might not be able to get all the details right in the beginning, so it is preferred to watch a tutorial on them.

They are a great addition to your portfolio, and as everyone is aware of who Tom and Jerry are, you won’t have to try to keep explaining why your sketch looks the way it does.

They have entertained everyone for a long time, so you can just pick any of their poses that you think will work the best.

Whether Jerry is stealing some cheese while Tom is sleeping in the background or Tom chasing Jerry, all kinds of drawings are considered legendary.

Do you want to try drawing Shaggy Rogers?

Shaggy Rogers is another fictional character who is not only cowardly but has a deep friendship with another cartoon character and that is Scooby-Doo. Yeah, it is right!

He is the best friend of Scooby-Doo. As Scooby-Doo is less interested in solving the mysteries, similarly, Shaggy Rogers likes to eat food instead of mystery-solving.

With plain yellow short and blonde hair, this slim guy is very easy to draw.

With a few shapes and lines, you can easily draw this character. 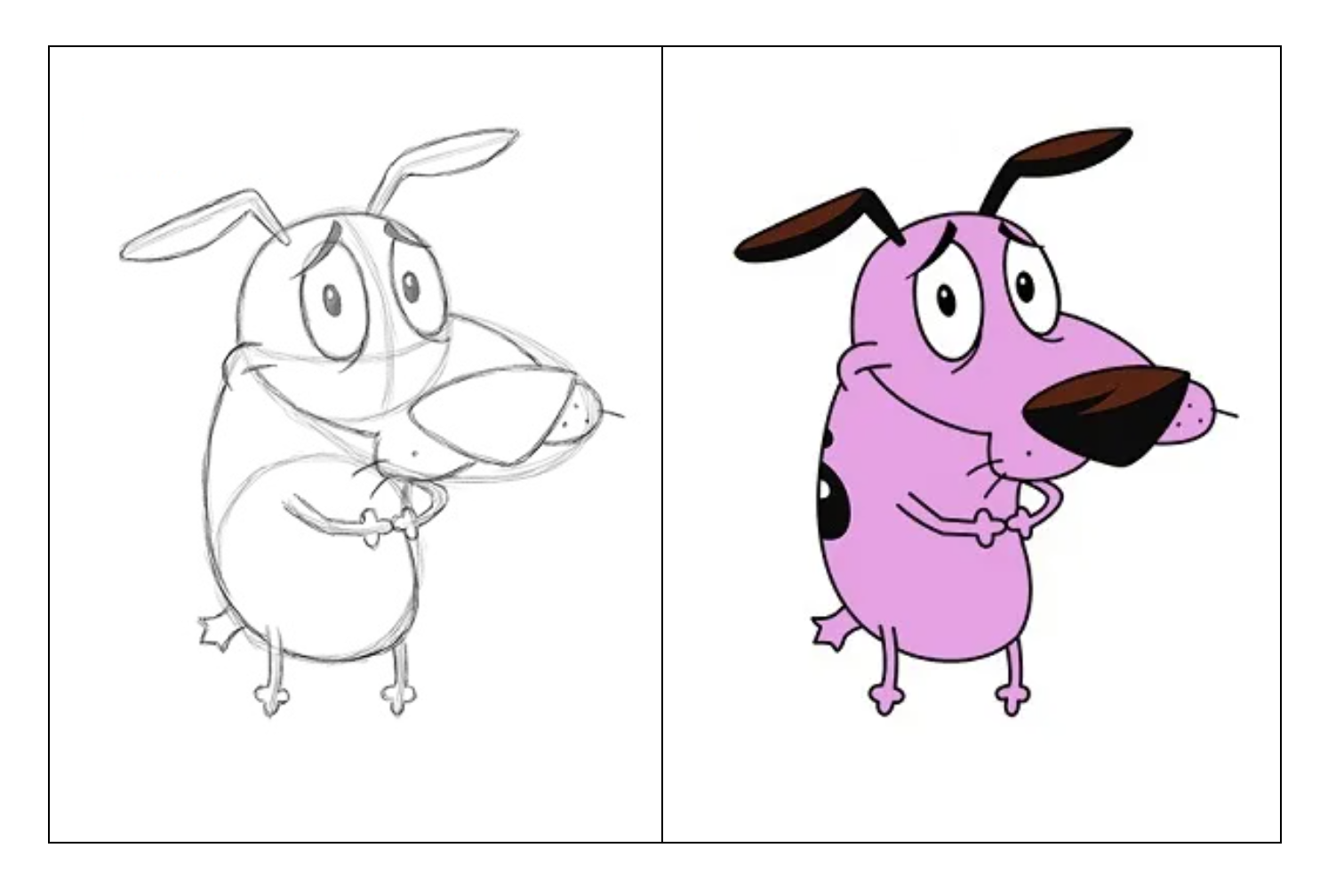 Courage always had a lot of emotions on his face, fear, anger, and sometimes pity for himself.

While it is important to capture his expressions and emotions, his body structure is still simple to draw.

The small teeth, the large eyes, and the antenna-like ears can be drawn on the paper without having to follow a tutorial.

But if you still need one, you can probably find them on YouTube or some other platform. 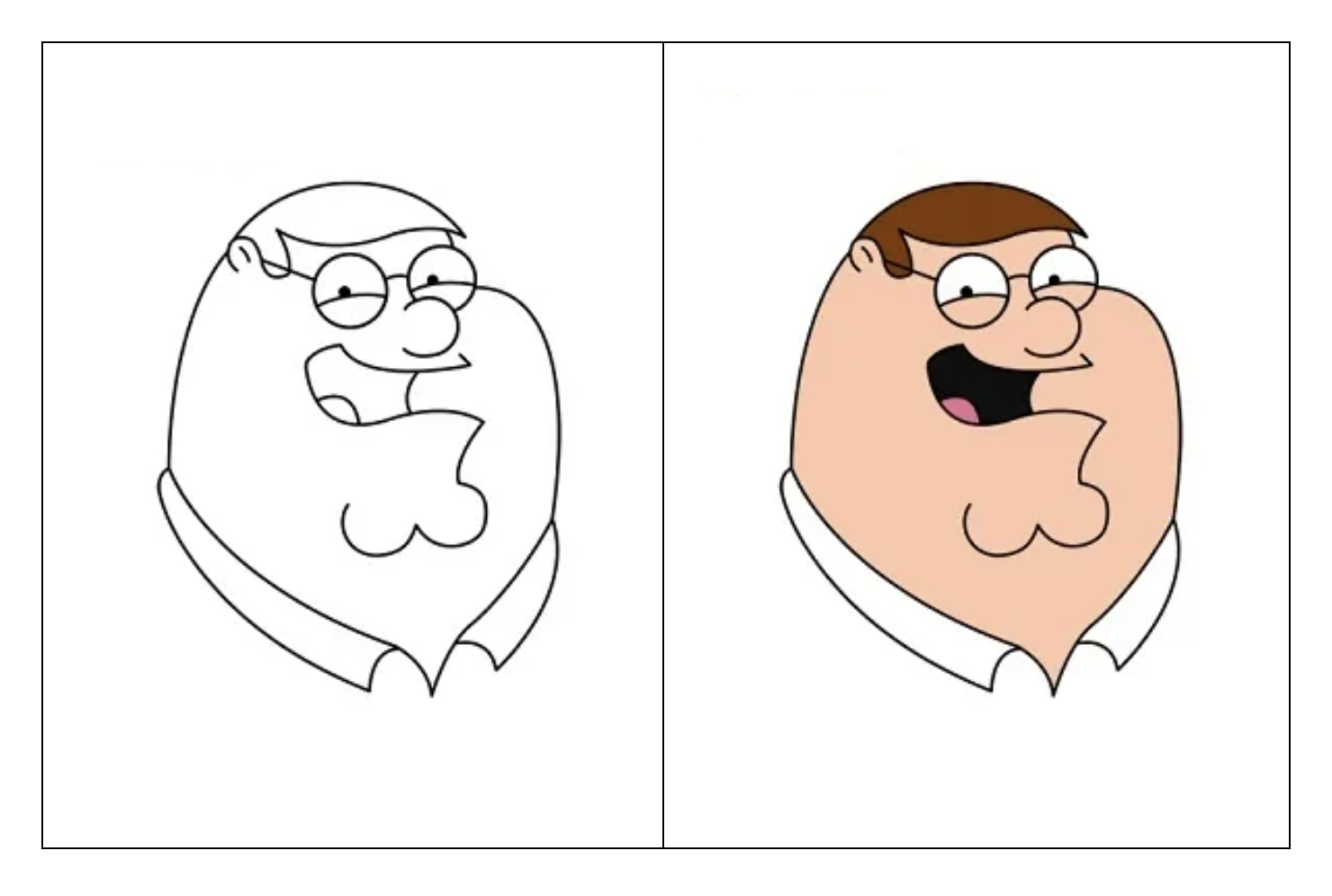 The show started in 1999 and has been entertaining everyone since.

With 19+ seasons, Peter Griffin’s animators have improved him a lot while he is still the goofy fella.

He has a heavy physique and very simple features.

While drawing Peter Griffin, you will need to be careful about his glasses as they are also his eyes and need to present the look of both.

Other than that, all of his expressions can be captured easily. 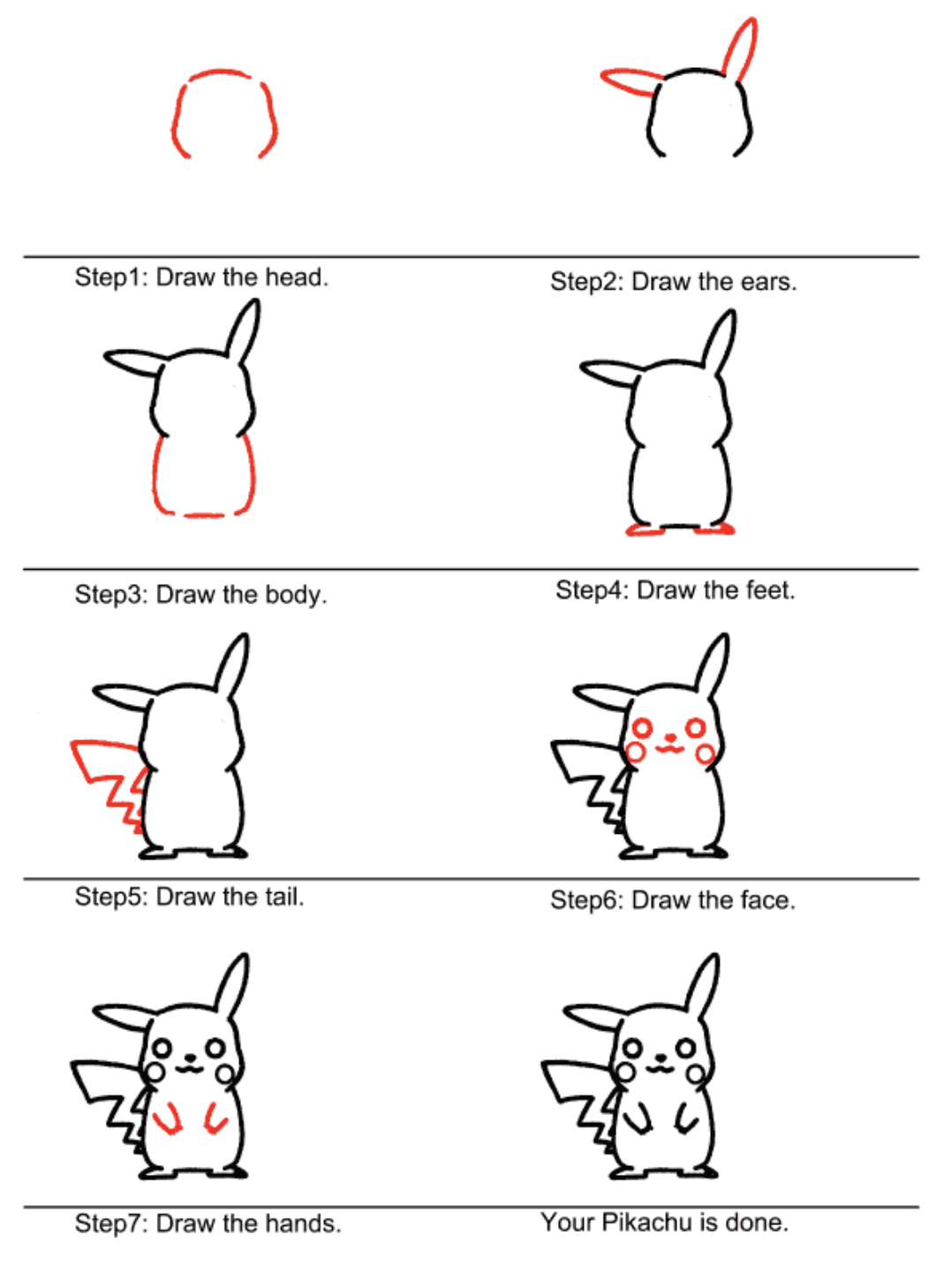 Pikachu is a very famous character from the Pokemon cartoon.

The character took hype again when the creators launched their game to capture all the Pokemon.

He is a simple character to draw, just add the yellow color, the red cheeks, and some little details on his body, and you will have the perfect drawing. 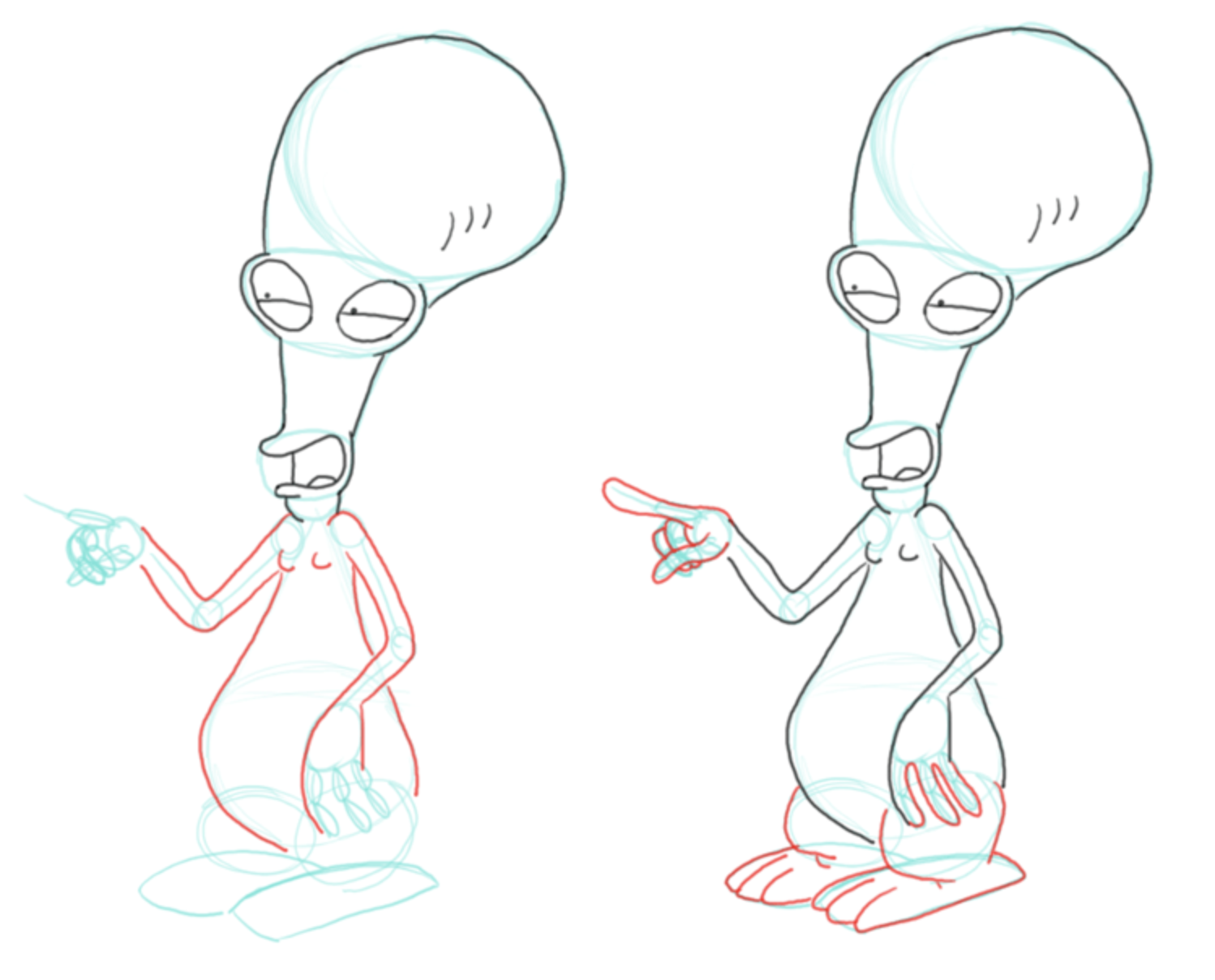 The American Dad show cannot be complete without this alien, and it is the highlight of the show in most of the episodes.

He is not just fun to watch, but easy to draw as well.

You can draw the body as the alien you always had in mind and add some details to make it more defined.

His body is mostly ovals or spheres with nothing too defined.

Just take care of the head of him as it is the trickiest part of his body, and you are good to go with everything else.

Step by Step Instructions: Drawing How to Draw 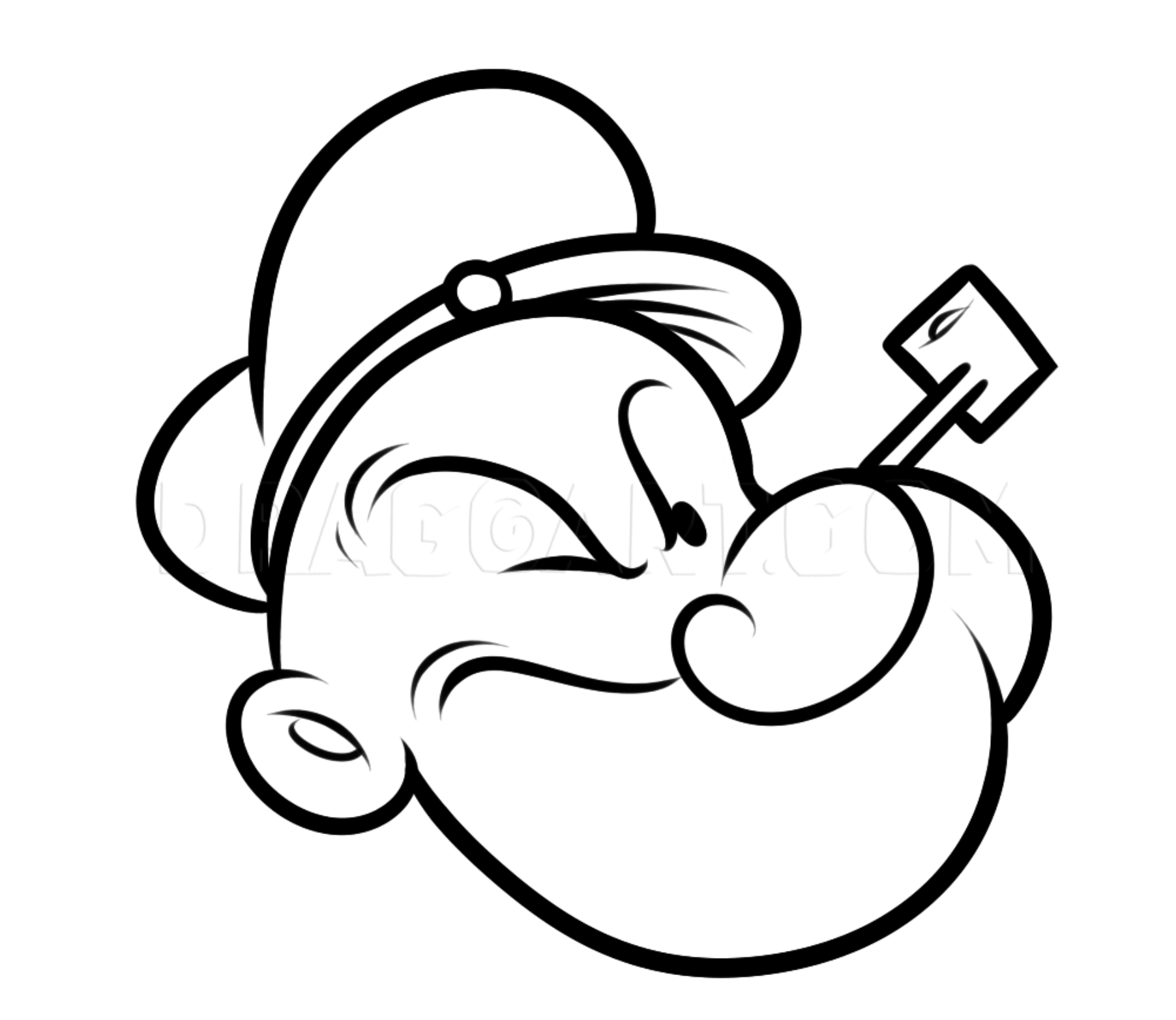 So, here is another cartoon character that you can draw very easily.

His name is Popeye. It is quite fun to draw this cartoon character.

Not only the kids but adults also love to draw Popeye.

With a large chin and large over-sized forearms, you can add some basic shapes and lines.

Add some color over them and you are good to go. 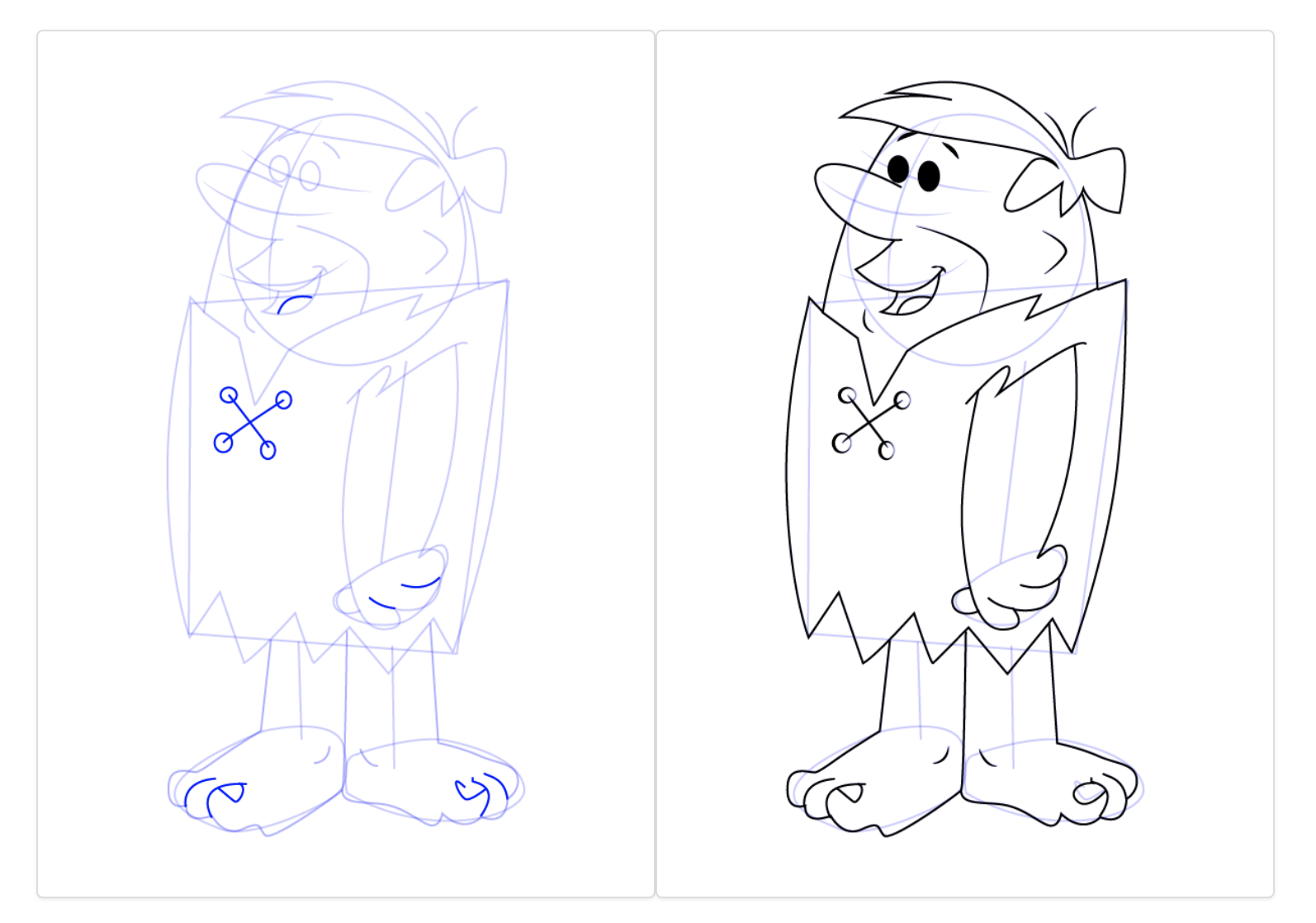 Another popular cartoon character in our list that is quite easy to draw is Barney Rubble.

He is one of the quirky characters of the animated television series.

It is a simple character.

Just add some simple shapes, lines, and draw his big feet and ears.

Once you get to know which shapes work better for drawing Barney Rubble, you can easily draw Barney Rubble from any angle you want. 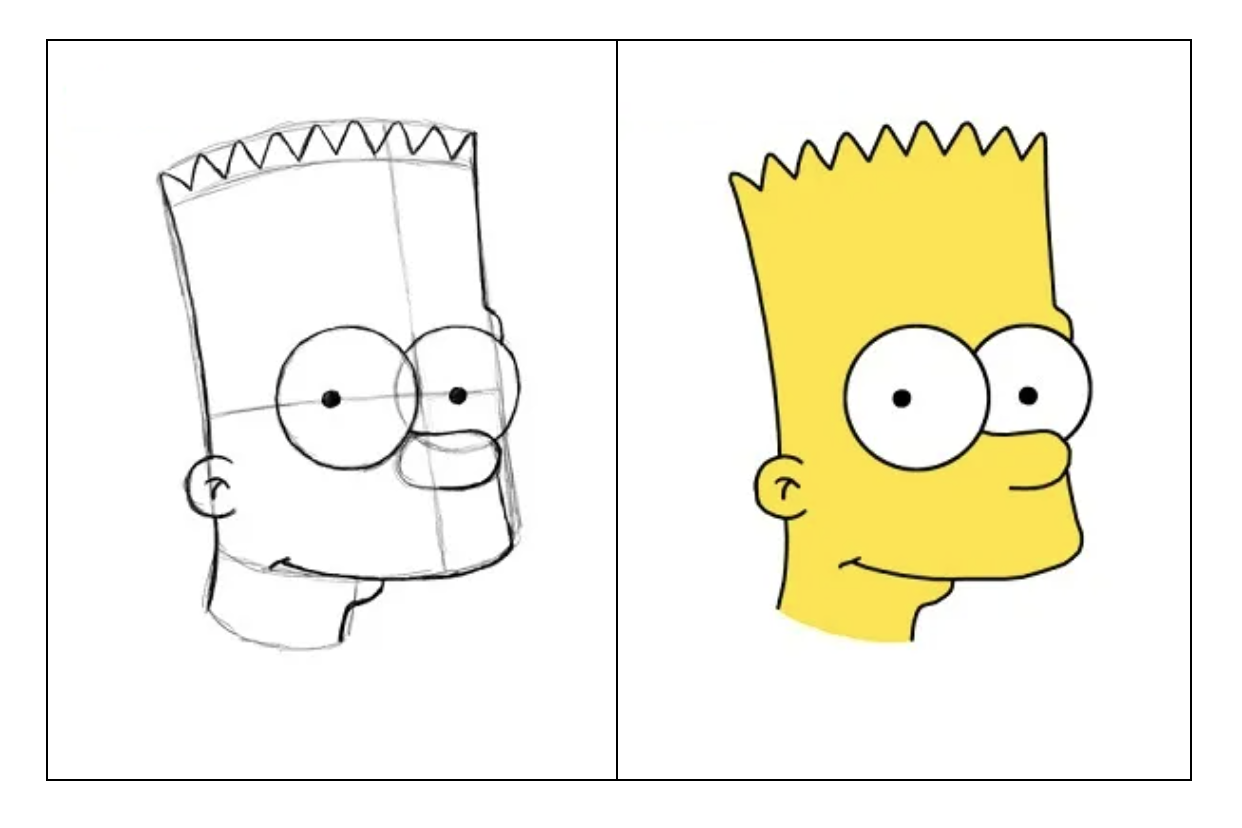 Another famous cartoon character of the American animated TV series that you can draw easily is Bart Simpson.

With spiky yellow or blond hair and two-colored clothes, kids do not only love to watch this character but they like drawing it as well.

It is quite easy to draw Bart Simpson.

You can find some simple shapes to draw it. 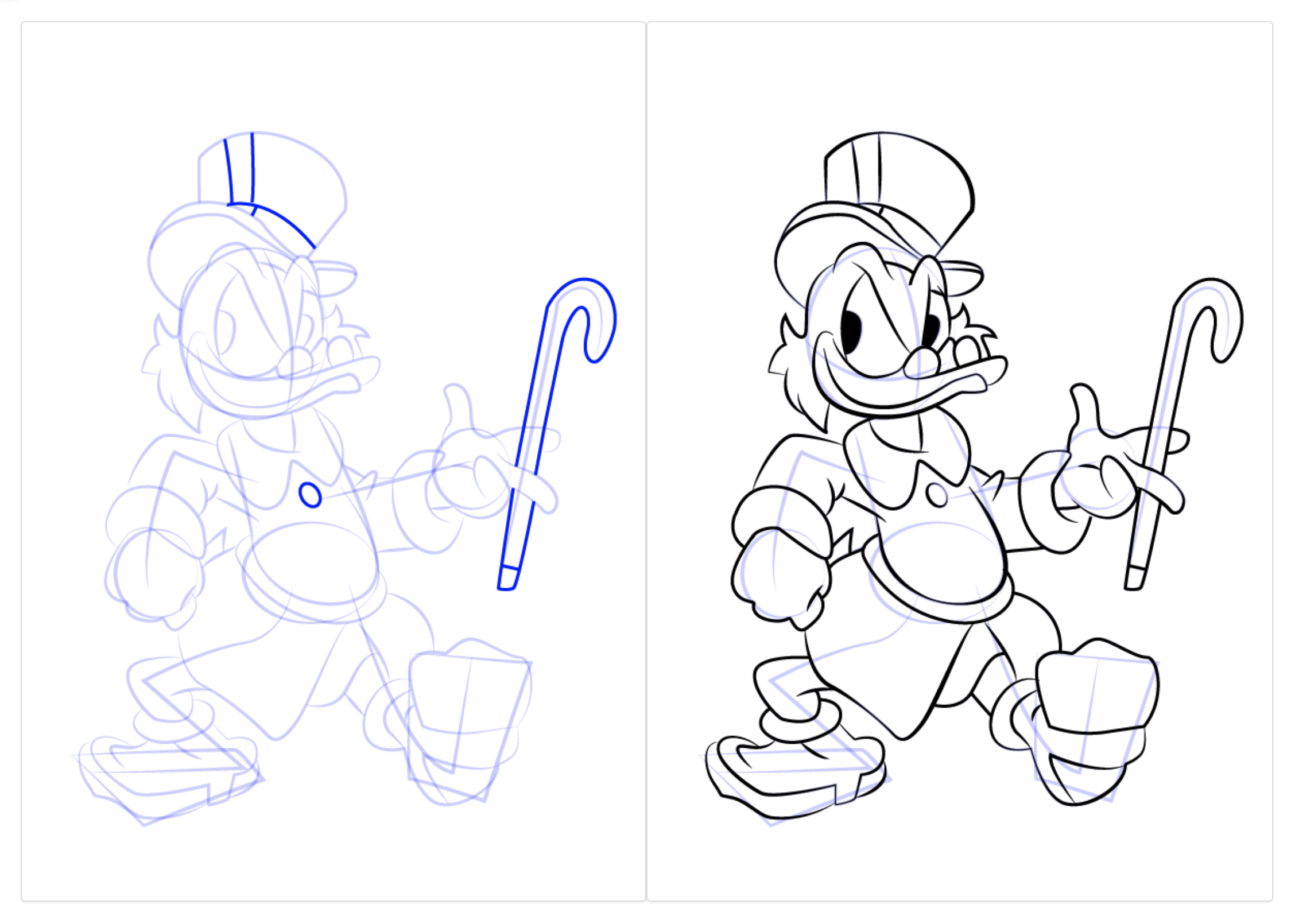 Scrooge McDuck is another fun cartoon character that not only the children but adults also love to draw.

With a unique hat, small reading glasses, and a smiling face, it is very easy to draw Scrooge McDuck. 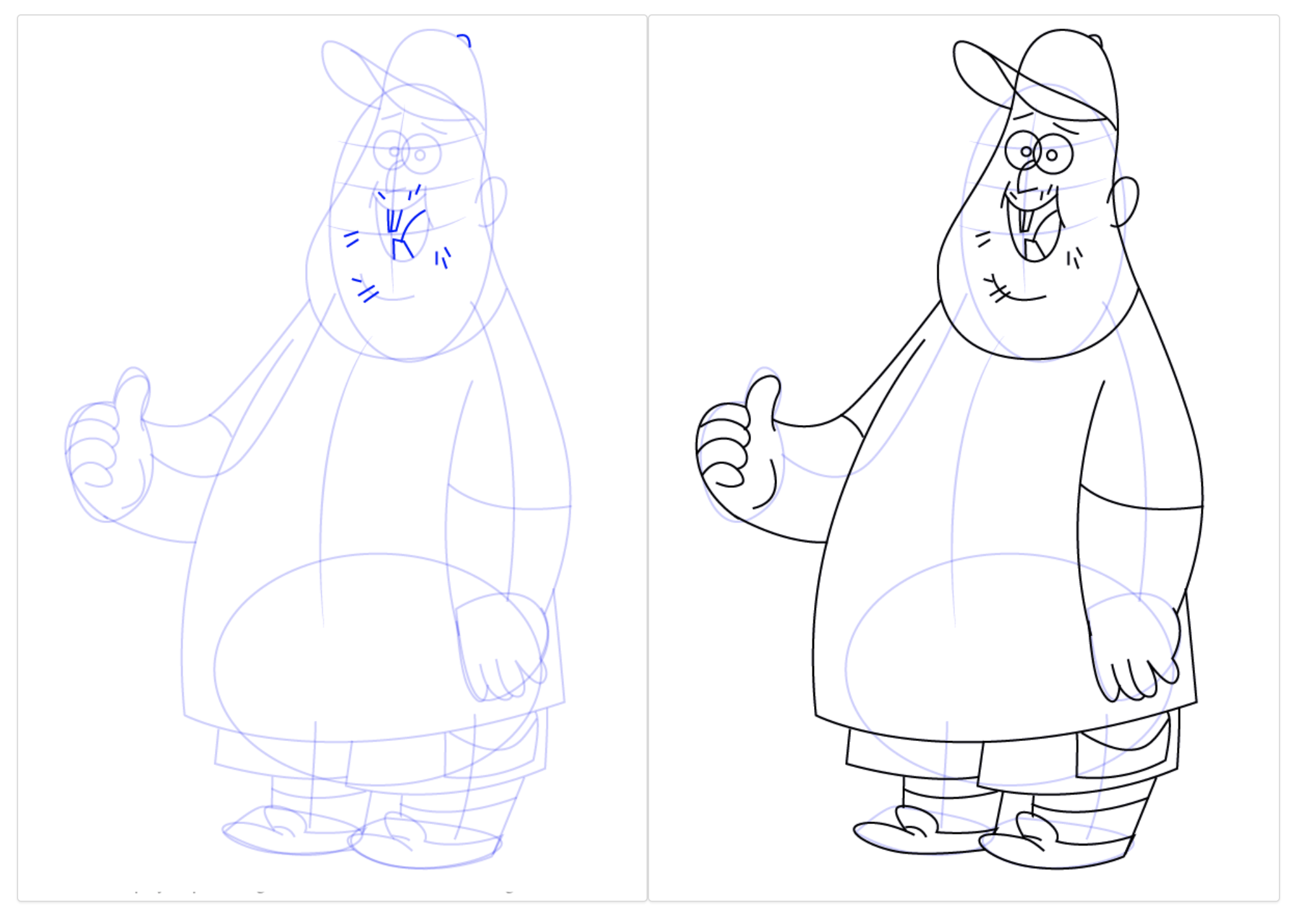 If I talk about cartoon characters, there is one popular character that can never be left out.

And that is Soos Ramirez. He is a chubby happy-go-lucky and lovable guy with round-shaped eyes.

Add some green color on his shirt, white on his pants/shorts, and grey on his hat and shoes.

For drawing Soos Ramirez, add some little details and you are good to go.

Drawing is a thing that can be improved by practice.

Most people like to draw something when they get bored.

For example, some people like to draw flowers, animals, landscapes, houses, and much more.

While there are some people who like to draw their favorite cartoon characters.

If you are one of them, you can draw all the above-mentioned cartoon characters.

From Bugs Bunny, Patrick Star, Tom and Jerry to Catdog and Peter Griffin, all these are easy cartoon characters to draw.

They are also cute and fun to draw.

They can be built on some simple shapes and do not require a lot of practice. So, do not wait anymore.

If you are getting bored, pick a paper and pencil, pick any of the cartoon characters from the above list, and start drawing. Have fun!

Other featured topics to help you draw things that are easy

Here are Some of my Favorite Drawing Tools

Thank you for reading this article. I hope you found this helpful in improving your art.

Here are some tools I use as an artist, and I hope you find them helpful.

These are affiliate links, so if you decide to use any of them, I may earn a commission at no additional cost to you.

I’ve been using them for more than 15 years. I’ve never had the lead break on me and they are quite sturdy. They also come in a wide range of hard to soft.

The rich colors in their color pencils (on Amazon) and the way they blend are amazing.

Markers – Copic markers (on Amazon) are my number 1 choice. I love these markers!

The way they blend and the marker texture they give when you render details is nothing short of amazing!